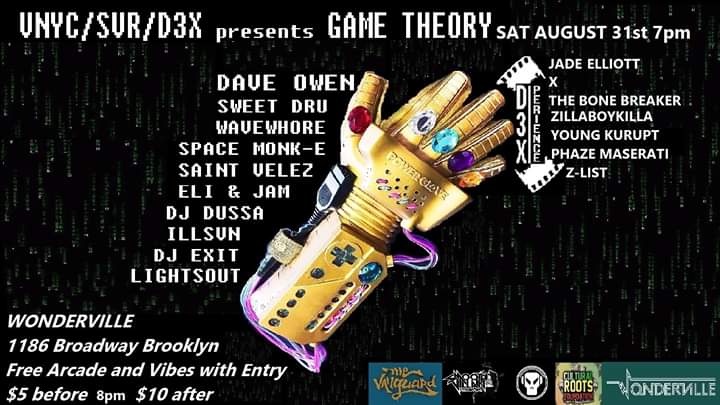 Over the past few years, Dave Owen has risen to become one of the most highly sought after drum-n-bass producers in the United States. His soulful sensibilities have caught the attention of the genre’s upper echelon including LTJ Bukem, Fabio, Grooverider, John B, and several others. Watch for massive releases from him on Creative Source and Good Looking!

FKA MICETRO has been a trailblazer of production styles, from indie trap remix releases such as Roscoe Dash Turnt Up and house and techno releases outta Valencia/Ibiza Spain with ZEE (Zebbler Encanti Experience) and Zakim Records. In addition to performing between the USA and Europe his productions have been played by such juggernauts as Zedds Dead and Dj Clue. Currently based out of Boston his new tech house direction has been climbing charts via his outstanding massive sub bass compressions only Sweet Dru can bring.

With releases on high profile record labels such as iBreaks, Elektroshok, Hardcore Beats, Broke, Electrofly and Bombtraxx, New York City based Wavewhore has established himself as one of the USA’s leading breakbeat producers. His skills behind the decks have also led to headlining appearances across the US, Europe and Asia as well as a long-running residency at New York City's legendary Sullivan Room. In addition, his music and DJ performances have been featured on many of the world’s top broadcast media outlets including BBC Radio 1 London, WKTU 103.5 FM New York, KISS FM London, RTE Dublin, Sirius Satellite Radio and MTV.

Since exploding onto the scene, Space Monk-E has become a household name within the American Dance music culture. Over the past two decades The talented artist has become one of the East Coast’s most sought after DJs, thanks to his energetic, hard hitting performances. With styles ranging from Hard Electro to booty-shaking bass, he has an energy and raw talent that many other
DJs can only dream of having. Space Monk-E's phenomenal ability of pleasing crowds wherever he spins is one of the many reasons directly attributed in helping him secure residencies at some of NYC’s most legendary venues including the: Limelight, Tunnel and The Original EXIT. He has been billed on countless underground events, supporting international stars such as: TJR, DJ Funk, Frankie Bones, and Bad Boy Bill.

From funk to dnb he always bring the grooves to the vibe. While receiving a Masters degree from Carnegie Mellon in percussion he was a resident dj at The BBT a well known dub and drum & bass venue that was frequented in joint performances with AK1200 and Diesel boy. Then in 2004 he signed with Wilderness research in which we brought and opened for such headliners as DFuse and Tiesto. He continued to travel and perform all over the world opening for Rusko, Q-Bit, Kryteria, Klute, Arqer & Realtime, Dj Sun, Encanti, Impress, Quest Love and Dj Clue. During this time he started The Vanguard Performing Arts venues worldwide. Currently living in NYC performing on Broadway and djing shows from the Roxy Hotel to Brooklyn Bowl while dropping releases via Culturul Roots and Kontrast Crew's. Back in NYC after summer 2018 at his residency clubs located in Valencia/Ibiza Spain and touring performances with Robert Glasper, Jalil B and The Mix Eclectic fall 2019.

Like a cool breeze on a beach somewhere Epic! Eli Costello's music is the refreshing getaway listeners having been waiting for with a mixture of Chill, Dance, and Dopeness. Good Vibes, Expert Storytelling, and Showmanship ooze from this artist that is picking up attention online and on the NY nightclub scene.

is a NYC based DJ/Producer thats played the likes of Webster Hall, Pacha and had residency at the former legendary LES venue, “Lit Lounge” when he first broke into the scene. After learning the basics from some of NYC’s best underground DJs, landing a spot on the Smooth Villains DJ roster, and then furthering that by releasing original music on the label worldwide via Spotify, Apple Music, ILLSVN has grown his brand into a widely recognized namesake in the NYC Scene with no looks of slowing down being in the near future.
A purveyor of house music across multiple genres, ILLSVN DJ sets bring the noise in a unique way each and every time that keeps the crowd moving and interested. Dont sleep on the Svn, or you might get burnt.

One of Brooklyn's newest faces Saint Velez is making his return to Wonderville. Saint Velez is a resident artist for Dekonstrukt Records, voice of the Foundations podcast on Digitally imported. His releases and remixes has had support from the likes Mark Greene, Loco Dice, and Richie Hawtin.

Ian Hayes' (LightsOut) musical tastes were forged at a young age with grunge, punk rock, early electronica and hip hop. He went from electric bass to the decks at the age of 17. Beginning to experiment with production soon after, he was inspired by the darker electronic sounds of acid techno, hard trance, trip hop, industrial, and especially drum'n'bass. He applies the early love of the dark sounds with attempts to create futuristic atmospheres and "journey" type story telling in the DJ set. Graduating from Appalachian State University for Audio production with a double bass concentration in 2010, he formed a connection with Nu-Soul Magazine and moved from North Carolina to Los Angeles, CA where he became affiliated with Westbay Music, soon followed by Signal Flow Radio, a weekly show that provides a glimpse into the excellent drum'n'bass talent that LA has to offer. Now residing in Brooklyn, NY, LightsOut is attempting to continue the Signal Flow tradition in an east coast edition on dirtybass.fm, as well as DJing and producing drum'n'bass, techno, and other electronic genres.

Featuring local and international talent including DAVE OWEN (DnB master), D3XPERIENCE (champion dance crew), Eli COSTELLO (x factor semi finalist) and SWEET DRU (tech house/trap innovator aka micetro) among many others performing electronic & live bass music, breakbeat, drum and bass, RnB, nuero, hard tech and hip hop!! Wonderville is an independent arcade game bar and event space run by artists who are interested in cultivating the indie game scene in connection with other types of media. This is a multi-genre electronic music event and all of the games are custom made and free to enjoy… check out the Facebook event page in the comments for more details!!